New Years resolutions frequently include determination to get healthier. January is a busy time for gym memberships and exercise equipment. Although exercise is important, being healthy involves more than increasing

exercise. I was recently reminded of something I first heard from Colin T Campbell in his book “The China Study”, when it was echoed by Dr. john McDougal. Colin T. Campbell discusses the Chinese Government tracking health issues of it’s people over a long period of time. 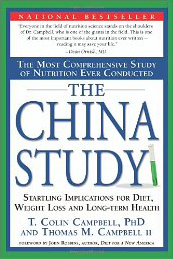 The results of this study revealed people died from two different classifications of disease. One was disease of affluence and the other of poverty. The wealthy people in China who could afford to eat more abundantly of animal products were dying of diseases of affluence (heart disease, diabetes, cancers etc.) Diseases of affluence are the same leading causes of death in the USA. Death by poverty involved lack of medical care for traumatic care, such as complications of childbirth, serious accidents, etc. Rarely did impoverished people die of diseases of affluence. Dr. John McDougal refers to our eating habits as living like royalty vs. peasants. The same situation applies. If you live like a king and eat that way each day, you begin to take on the size and shape of the royal elite. Again, diseases of affluence become more prevalent.

In days past, if you couldn’t afford to eat animal products, what would your dietary staples include? What ever you could grow in your backyard. It would be plant based. Often people express concerns about getting enough protein from a plant-based diet, however plant based diets sustained the bulk of people since the beginning of time. Plant based diets also sustain some of the largest mammals on earth, who grow an even larger muscle mass than humans.

How did we become so disenchanted with plants and so enthralled with animals as food? According to Dr. McDougal, there is a relationship between food, government, and the tobacco industry. When government started issuing health warnings about the use of tobacco, it was the beginning of the end of a very lucrative tobacco industry. Fast forward a number of years to the initial grumblings of health related issues concerning animal products and heart disease. The huge animal product industry saw itself facing the same fate as tobacco. Determined not to go down without a fight, they waged a huge advertising campaign to educate people to the benefits of animal proteins while waging a similar campaign about the pit falls of carbohydrates. The rest was history.

Since that time, as a nation we have seen our health issues expanding in proportion to our consumption of animal products. It’s not uncommon for people to put on 5-8 pounds during the holidays, every year, without successfully reversing that trend through the upcoming year. Each year we get heavier until we have slipped beyond “putting on a few pounds” to actually falling into the obese classification. Not only are more of us falling into that obese category, we are raising our children to be the same. In my lifetime, I have seen the trend reverse from fit children being the norm to the fit children being the exception.

The plant-based diet is picking up momentum with the reversal of many health issues being a pleasant side effect! If it’s your New Years resolution to improve your health, my suggestion is to evaluate the use of animal products in your diet, increase your consumption of healthy carbohydrates, and exercise. You don’t have to act radically, just start increasing the good stuff while you crowd out the bad stuff while you consciously start making better choices. For these and other easy suggestions to improve over all health, one step at a time, consider buying my book “Over the Lips and Through the Gums”. It is a simple, easy, guide to assist a gentle, transformation into a permanent life style, rather than a temporary quick fix.

Posted in:
Tagged with: